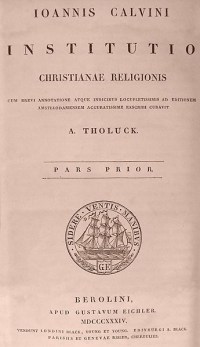 If you’re still not sure, then here is the list of ten reasons:

1. Because it the most important book written in the last 500 years.

2. Because it is foundational for every Reformed systematic theology ever since.

3. Because Calvin was the best exegete in the history of Christianity.

4. Because Calvin is one of the five greatest theologians in Christian history.

5. Because he wrote it as a “sum of piety” not as an arid, speculative dogmatic treatise.

6. Because it gave J.I. Packer the idea for “Knowing God.”

7. Because Calvin thought and wrote succintly and clearly. “Brevitas et claritas” was his motto – brief and clear!

8. Because you will know God better, if you read it prayerfully and believingly.

9. Because it’s the 500th anniversary year of Calvin’s birthday. Don’t be a party pooper.

10. Because I agree with what Derek and Iain say in their posts.

2 thoughts on “Calvin’s Institutes are both important and free!”