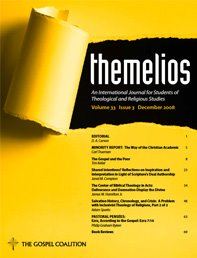 Justin Taylor (from the Between Two Worlds blog) has recently highlighted a great free online Christian Magazine called Themelios. The latest version for April 2009 has just been released, but you can delve into the archives of approximately 100 copies as well

You can either read it online via HTML or iPaper, or download the PDF. Here is the table of contents, as you can see it covers some meaty subject matters!