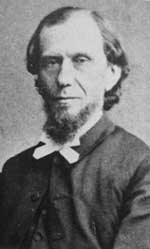 Master’s Indwelling by Andrew Murray is a new addition to the Christian Classics Ethereal Library. Andrew Murray (1828-1917) was a minister from South Africa who was heavily involved in the South African Revival of 1860. He was a prolific writer, and produced over 240 books in his life.

Master’s Indwelling was initially a series of sermons that were then rewritten into book form. You can get in pdf, word, plain text or simply view it online at Christian Classics Ethereal Library. The essence of the book is whether Christ is living in you. Of whether the Spirit drives your thoughts and actions.

Here is a quote from the book:

The question comes again: Why is it that God’s people do not know their God? And the answer is: They take anything rather than God,—ministers, and preaching, and books, and prayers, and work, and efforts, any exertion of human nature, instead of waiting, and waiting long if need be, until God reveals Himself. No teaching that we may get, and no effort that we may put forth, can put us in possession of this blessed light of God, all in all to our souls. But still it is attainable, it is within reach, if God will reveal Himself.
from “Waiting on God” http://www.ccel.org/ccel/murray/indwelling.vi.html