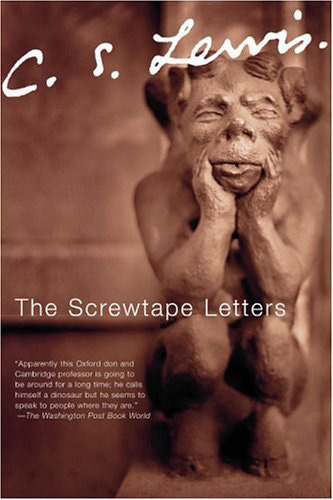 The Screwtape Letters by CS Lewis

The classic novel by CS Lewis that is a series of letters from a senior demon called Screwtape.

Okay – I have been a long time updating on this website as per my last post, but now I am back!

I thought it would be good to promote a great book that I read before I gave my life to Christ that was written by CS Lewis. It is still one of my favourite books that I’ve read a few times since.

The Screwtape Letters is a rare type of Christian book in that it isn’t a study of the bible or a “self-help” book – it is a novel. And yet it is a novel that holds so much truth, and is so clear in its message.

The book is made up of a series of letters from a senior demon who is called Screwtape to his nephew Wormwood. Wormwood is a Junior Tempter who has the aim of securing the damnation of man known only as “the Patient”.He does this through various methods such as temptation, undermining God, undermining the Church, and various other methods.

Here is a small extract:

I note with grave displeasure that your patient has become a Christian. Do not indulge the hope that you will escape the usual penalties; indeed, in your better moments, I trust you would hardly even wish to do so. In the meantime we must make the best of the situation. There is no need to despair; hundreds of these adult converts have been reclaimed after a I brief sojourn in the Enemy’s camp and are now with us. All the habits of the patient, both mental and bodily, are still in our favour.

One of our great allies at present is the Church itself. Do not misunderstand me. I do riot mean the Church as we see her spread but through all time and space and rooted in eternity, terrible as an army with banners. That, I confess, is a spectacle which makes I our boldest tempters uneasy. But fortunately it is quite invisible to these humans. All your patient sees is the half-finished, sham Gothic erection on the new building estate. When he goes inside, he sees the local grocer with rather in oily expression on his face bustling up to offer him one shiny little book containing a liturgy which neither of them understands, and one shabby little book containing corrupt texts of a number of religious lyrics, mostly bad, and in very small print. When he gets to his pew and looks round him he sees just that selection of his neighbours whom he has hitherto avoided.

You want to lean pretty heavily on those neighbours. Make his mind flit to and fro between an expression like “the body of Christ” and the actual faces in the next pew. It matters very little, of course, what kind of people that next pew really contains. You may know one of them to be a great warrior on the Enemy’s side. No matter. Your patient, thanks to Our Father below, is a fool. Provided that any of those neighbours sing out of tune, or have boots that squeak, or double chins, or odd clothes, the patient will quite easily believe that their religion must therefore be somehow ridiculous. At his present stage, you see, he has an idea of “Christians” in his mind which he supposes to be spiritual but which, in fact, is largely pictorial. His mind is full of togas and sandals and armour and bare legs and the mere fact that the other people in church wear modern clothes is a real—though of course an unconscious—difficulty to him. Never let it come to the surface; never let him ask what he expected them to look like. Keep everything hazy in his mind now, and you will have all eternity wherein to amuse yourself by producing in him the peculiar kind of clarity which Hell affords.